I have a great passion for J-pop musics.
There is something in the music that deeply touches the very soul and heart.
And what’s really amazing is that you don’t get sick with the music not even decades down the road. Also, you don’t have to understand Japanese language to like J-pop.

J-pop band ,”Monkey Majik” is my latest addiction.
Didn’t know the group until they were featured in one of the news program, doing charity shows to help reconstruct the stricken areas, that the 3.11 Tohoku earthquake brought about 2.5 years ago.

What caught my attention was at first, the group’s formation.
A four members group, made up of two Canadian brothers and two Japanese (@o@)
They are often being referred to as the “hybrid band”.
And did it strike you dumbfounded to know that the Canadian brothers are the vocalists!? They sing and speak really fluent Japanese though.

The group actually started out from Year 2000 and had since released many famous songs. So sorry that “ME”, the country pumpkin has totally been ignorant about it, all this while m(_ _)m

What’s the question? Why I love “Monkey Majik”?
Ok,,, I love the way in how they sing in Japanese with a western-like feel, something very new, very pop, yet sounds very pleasant to the ear  (*,, ^-^)
Love how their voice has a calming and soothing effect that works like a relaxant for me (^_-)v
In general, their music have the power to touch and move me to tears, giving me hope and courage at the same time.

“Headlight” is the first song of theirs that I listened to that moved me instantly. I had the YouTube embedded too if you would take time to listen to it. 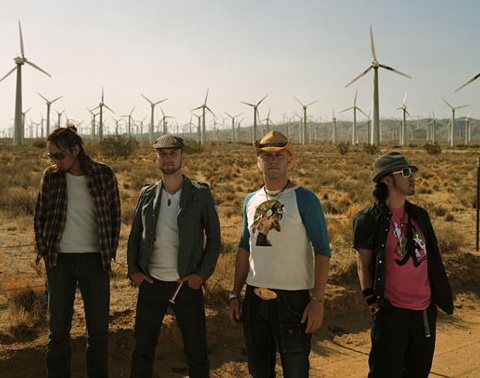