In my opinion, one of the must try if you are in Japan is “Mister Donut”.

Why donut? What’s so special?
Take a look at the donut menu. Doesn’t it convince you that you should give them a try? Hey, they really are as delicious as they looked.

Japan’s Mister Donut group has went through a lot of trouble to ensure their donuts stay competitive in Japan. Not only do the donuts come in all sorts of interesting shapes, the varieties are great and texture is something that you can really enjoy because each type is unique in their own way .And without saying,,, affordable price is what attracts too.

My favorite will be the regular, very popular “Pon de Ring”.
I just can’t get enough with the soft chewy texture. (@^-^@) 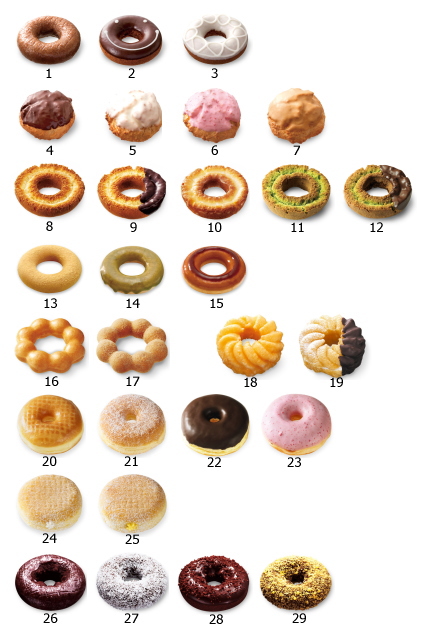 A very simple, yet elegant chic cut and sew dress perfect for this autumn.
Shirring are added to the sides to create a figure hugging cut, flattering the entire body shape.
Combined design of long sleeves and flare skirt that comes with plenty of gathers looks so classy and feminine.

If you find that this dress is too short for your liking, go with leggings or trendy tattoo tights. They look stylish without looking overly conservative. 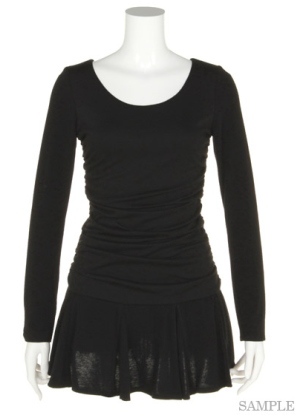 The skirt has tulle added in as lining to create a bit of volume to the skirt. How sweet!! 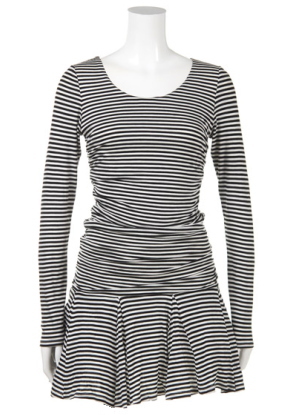 Stripes will never ever go out of fashion and they look fabulous on this dress too. 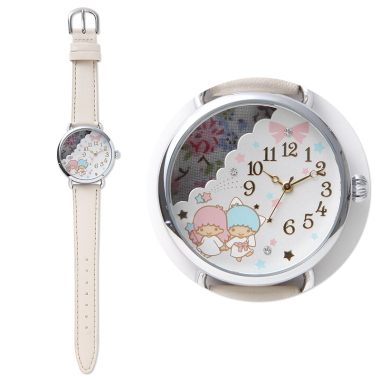 I will bet few people didn’t know about little twin stars.
Born in 1975, they are considered one of the most senior characters in Sanrio group.

Talk about popularity! Can you imagine that new items of Little Twin Stars are still making their way into market after all these 37 years (@^0^@)

It sets me wondering if kids these days know about “kiki & lala”.
But it doesn’t matter whether they know or not, because the little twin star’s watch, currently tops the ranking as the most sellable items among sanrio’s character goods.

No doubt that the sweet design attracts, but the charm of cuties, “kiki and lala” win the heart of many, I think.

There are altogether 3 styles and 2 ways of doing for each style. What’s more, each is fabulous in its own way & easy to style.

I didn’t realize that long hair can be this fun and versatile!

Style1： Pony tail
Elli shows you how classic ponytails need not be boring or plain. The trick to cool ponytail is that she uses part of the hair to wind around the knot, tied. Leave some loose strands down the shoulder for the rugged look.

Style2： Pigtails
The adult version of twin buns. Knotting up in small bundles on top looks so cute and stylish! Alternatively, bun them up into loops at the sides. These pigtail styles look so sweet and casual for dates (*^-^*)

Style3： Half Up half down
Half up styles are look so gorgeous and sophisticated. Elli opted to expose the ears with the first. She went for loose and volumed style at the crown for the second one. Natural wavy locks adds elegance. Cool huh!? 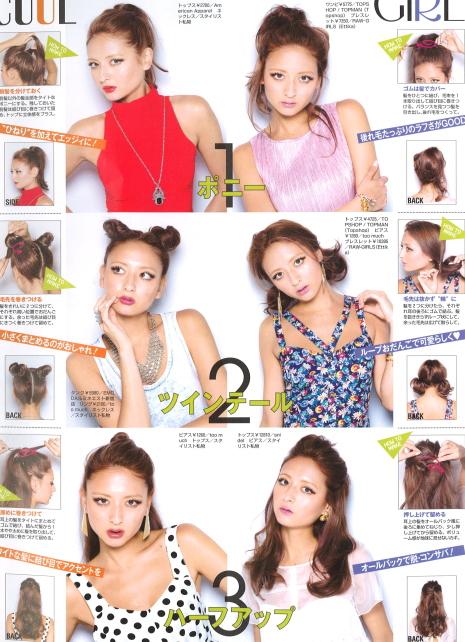 Two bottoms pick ups from ViVi for this coming autumn. The first contains a casual and multi-color short and next is a feminine skirt.

An unique autumn short featuring innovative design of tricolors, with each portion joined by fabrics of different texturings.

Style it with simple tops. Like what ViVi did, adding a pair of eye-catching burgundy tights is going to bring out the posh, fall look.

Elastic shirring at the back fits gives nice fittings to the waist.

The concept of pokemon cup noodles isn’t new and there are two flavors, soya sauce (left) or seafood (right).

The lovely packaging is one reason it attracts. But here is another reason why I think kids can’t get enough of pokemon cup noodles.
Imagine ingredients, shaped into Pikachu & Pokabu or tepig (soya sauce flavor) OR Pikachu & Oshawott (seafood flavor) floating on top the soup, staring back at you. Before you even know it, your kids will be gobbling down all pokemons and asking you for more!! 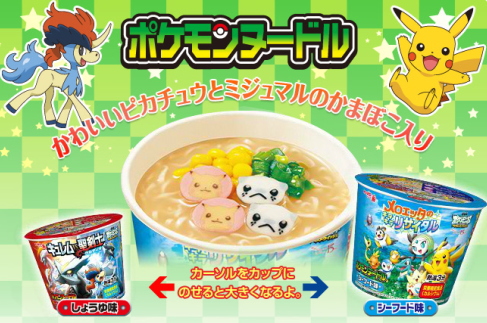 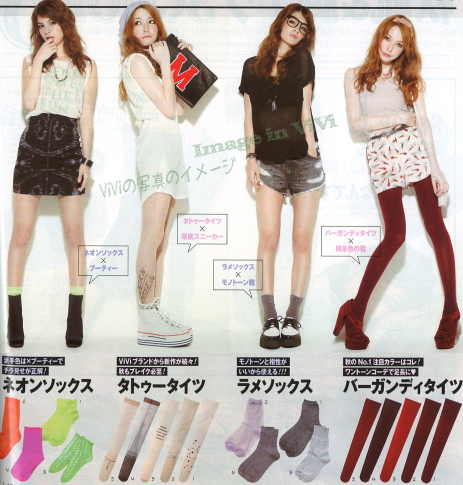 Socks and tights trend for this autumn

The month of September sees some hot autumn days which isn’t ideal for autumn wears. ViVi magazine show you some simple tips on how to transform to the autumn look with summer wears. Trendy autumn tights or socks are the items to invest in.

Burgundy tights – This autumn’s color trend. ViVi coordinate them with shoes having same color tone.
Lame socks – A regular item in autumn. They go well with monotone shoes.
Tattoo tight – Tattoo tight has been around since spring. This time, ViVi coordinate them with thick sole converse.
Neon socks – Who says they are too bright for the eyes? The color and length strikes a good balance with the bootie.

Please inquire through the below button for more details about these socks & tight.

The beauty of Japanese traditional sweets

It is Japanese nature to pursue beauty and perfection and food is just one of them. Often, it is said that Japanese food is not only about taste but also a masterpiece for admiration.

Do you know about traditional Japanese sweets “wagashi”?
“Wagashi” always looks very appetizing with its well considered color balancing, exquisite design and the use of vivid colors. The overall presentation is just like a piece of art.

Each is handmade and packed into classy looking boxes.
I am sure no one would mind to pay a little bit more for such exquisite work.

But I got mixed feelings about eating something that looks this good (^-^;).
Anyone feels the same?

Check out on the wagashi shopping site if you are interested. 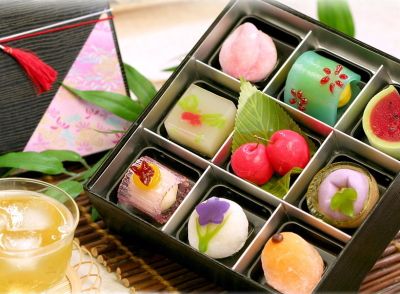 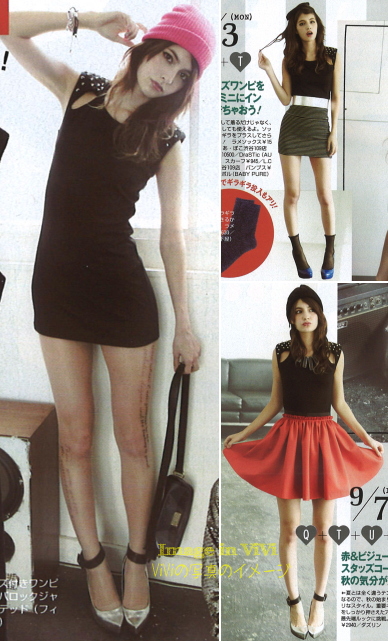 Today’s fashion theme will be cool and sexy style to flaunt off some nice curves.
This black short tight dress features simple & glamorous studs on the shoulders, with arms cut-outs revealing a conservative amount of skin.

It can be worn as a dress. For versatile changes, you can wear it as a top and coordinate it with flare skirts, mini skirts in autumn tones like what ViVi did on the pictures (right).

To visit Japan in summer might not be everyone’s cup of tea due to the high humidity and the sweltering heat. But don’t let the heat keep you away. Summer’s highlight, “Awao odori”, a very famous festival in Japan, took place in summer.

“Awa odori” is a traditional dance festival that is believed to originate from Tokushima around 400 years ago. And now, it became a big annual event that takes place throughout Japan during summer.

Depending on locations, streets will be closed to cars. For 2.5 hrs, you get to see performers in fanciful traditional costumes, dance, chant and sing while parading through the streets in groups. And you enjoy them for FREE (*^-^*)

The chant has a certain rhythmic beat that sounds funny but pleasant to the ears.

But with the end of of awa odori festival each year, it sets me that autumn is on its way and that somehow brought about a tinge of loneliness…

Note:- The schedule of the event varies on location. If you are thinking of joining one, next time, do ensure to confirm the performance date in advance. 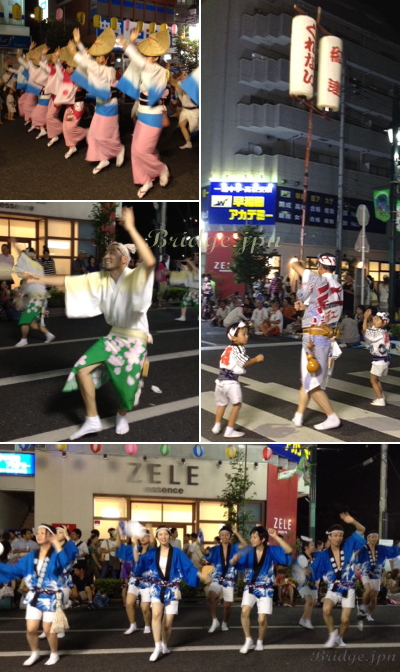 It was new to see an entire group of elderly. The dance was slow motion, but creative in the sense that they held musical tools making sounds to align to their dancing steps. 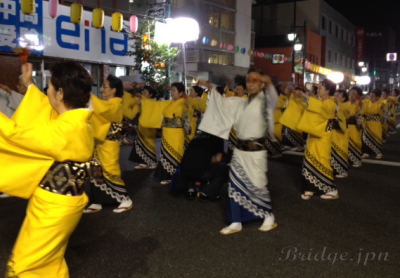 For the first time, the elderly group

And of course without the music… So the efforts of musical instruments players should not be forgotten. The drums, sure looks heavy enough! 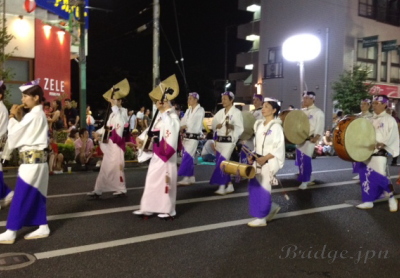 Traditional musical instrument players at the back