Fans of popular virtual idol “Hatsune Miku”, will be glad to know that they could get a “taste” of her in the real world (@o@)/~

“FamilyMart”, a convenience store in Japan, collaborated to produce “Hachune Miku meat bun”. It had started appearing on the steamer of FamilyMart since 14th-Aug.
For a limited period only, FamilyMart targets to sell 80 thousand buns at 180yen each.

“Hachune Miku meat bun” could “unaccountably” be the most delicious meat bun that Hatsune Miku lovers will ever have (^_-)v . 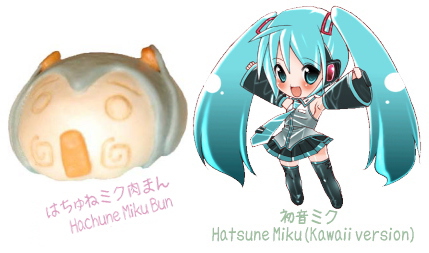 Rival “Circle K Sunkus”, another convenience store in Japan is joining the battle to show it is not intimidated by this o(*-*)o

It collaborated with Sanrio to produce “Hello Kitty meat bun”, which will start selling from this coming 16th October.

“Circle K Sunkus” seems determined to win this one because “Hello Kitty meat bun” each at 150yen is 30yen cheaper than “Hachune Miku meat bun” (- – ;;)!!
And what’s more,,, it targets to sell 150 thousand meat buns for a one month limited period.

Trust me. “Hello kitty meat bun” is going to be snatched up like crazy. 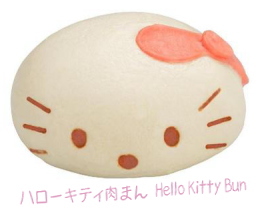 Not trying to sound cold-hearted, but consumers are the ones who benefit most from such rivalry. Its so amazing to be able to eat such cute meat buns in Japan (^-^)v