Basic instinct for me to start “googling” Yahoo Japan for news of earthquakes each time when buildings started swaying a bit in Tokyo.

Another M7.3 earthquake hit Japan’s Sanriku coast again, 2 days ago on 7th-Dec. I took to Yahoo for first hand news as usual. The information normally came up within 10 minutes after earthquakes occurred. It gave details like origin of the earthquake, magnitude, seismic intensity of each areas with a map of Japan, etc (See picture below).

The map indicated that this quake shook more than two-thirds of Japan (@ @;;)
Aomori prefecture recorded an earthquake of 5th degree on the seismic scale.
Tokyo recorded a 3~4 degree, with tremors lingering for quite some time. 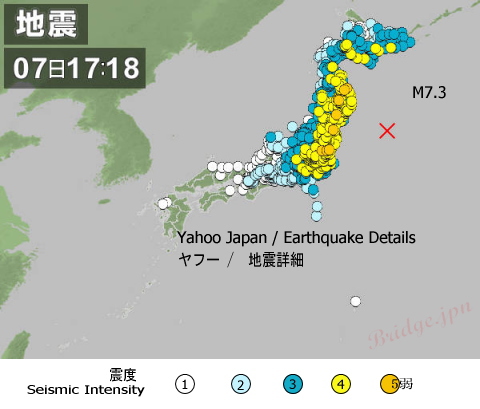