Today’s lunch is seasonal beef tongue served with rice in Ootoya.
Though the menu had been out for one month and is limited only for a period of time, I haven’t been wanting to try it as it seems heavy for lunch. Out of the blue today, I decided to give it a try since I wasn’t in any mood for diet.

While I was waiting for the food to come, the guy who was sitting on the table next to me, spoke suddenly in a loud voice: “Spicy! Spicy!” and then he was gulping down ice water as fast as he could. I took a glimpse of what he had eaten, and couldn’t contain my shock (‘O’*). I ordered exactly the same thing!
Having been in Japan for a quite while, my stomache had weakened against spicy food. I began regretting my choice even before I had a chance to taste it (`.__.`)

The delivered food sure looked delicious enough as usual, as perfect as it was. But, one spoonful is enough to tell it is indeed too spicy for most Japanese. The taste wasn’t bad, but it wasn’t to my liking.

I would rate it a 6 out of a scale of 10. But Ootoya deserved to be credited for their challenging spirits. You just have to take your hats off them for their continuous efforts to come up with new menus every now and then. 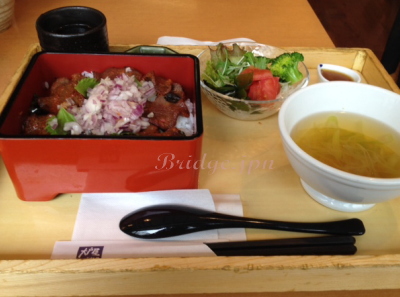