Rilakkuma for a toddler

He cries his way to nursery everyday.
Deciding that he needs a companion, Rilakkuma was chosen for the task to encourage and give him strength.

I bought Rilakkuma back. For the first time, I checked Rilakkuma thoroughly. It is amazing to know that despite having such small body, he has a big, heavy head. He looks very unproportional, but soon I realized that the design was intentionally to bring out the cuteness in Rilakkuma. Somehow Rilakkuma resembles his soon-to be little friend (@^-^@)

He likes Rilakkuma very much.
Rilakkuma became a close “friend” soon, and everyday he will try to stuff Rilakkuma into his bag which is way too small to fit in Rilakkuma. With Rilakkuma’s head popping out of the bag, he brings Rilakkuma to nursery and embraces Rilakkuma in his sleep everyday. Sometimes he wraps his hand around the neck of Rilakkuma. Other times, he will just seize one of the ears of Rilakkuma carrying it around.

HE is my NEPHEW.
My nephew had overcame the fear of nursery and now he loves going there!
Rilakkuma has opened his heart. My strategy worked! v(*^-^*)v
And all thanks to Rilakkuma. 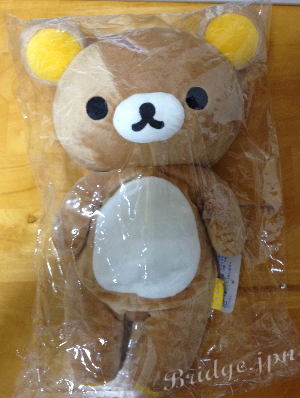